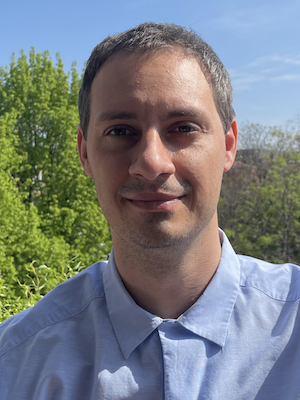 Tomáš (*1985, Slovakia) fell in love with chemistry when he took part in Chemistry Olympiad in high-school. He studied at the Masaryk University in Brno (Czechia), where he also started his doctoral research in the laboratory of organic photochemistry with Prof. Petr Klán in 2009. Since 2011, he commenced a joint-PhD program between Brno and Fribourg (Switzerland) and worked in the group of late Prof. Thomas Bally combining experiments and theory to understand reactive intermediates generated by light or heat. In 2014, he moved to Basel for a wonderful postdoctoral stay with Prof. Michal Juríček, a collaboration that lasts until present. In 2015, Tomáš pursued his ideas as a SNSF postdoctoral researcher at Northwestern University in Chicago with Prof. Michael R. Wasielewski and started his independent research as an SNSF Ambizione fellow at the University of Basel in late 2017.

He received funding from the ERC that allowed him to move his group and became an Assistant Professor in DCBP in April 2021.

The research in the Šolomek group revolves around the effect of topology on the properties of organic molecules and materials. The current interests focus on design and synthesis of functional porous organic cages and macrocycles, or molecular nanocarbons with unusual topologies. These molecules allow to investigate fundamental concepts in chemistry and explore new phenomena that emerge as a consequence of the three-dimensional molecular topography or curvature.

The research of the Šolomek group typically combines multi-step organic synthesis, quantum-chemical calculations to predict the synthesis and understand the experiments, and spectroscopy. Such a mix of methods often requires collaborative efforts that the Šolomek group enjoys a lot.